Is It Over for the Republic?

I keep seeing articles and commentary on how we are finished as a Republic.  The most recent is this article by Paul Bremmer discussing Danial Horrowitz’s latest book.

Bremmer/Horrowitz is right where Article III is concerned, though I’m admittedly biased in that I’ve been saying this for years. Actually, all that really needs done is require strict scrutiny on the Bill of Rights cases and restriction of the 14 Amendment to its intended scope. Unfortunately, there is a much more fundamental problem that will keep the Article III solution from ever being implemented; the 17th Amendment.

The Senate was never intended to reflect the will of the People. It was to reflect the will of the States. In ratifying this amendment at the beginning of the Progressive movement in America, the States effectively disenfranchised themselves. Note that much of the check-and-balance power of Congress rests in the Senate (the States) as judge with the House (the People) as accuser. It has also entrenched the parties as the actual national power serving their own interests and not that of either the States or the People.

However, I disagree with Horrowitz where the end of the Republic is concerned. We have 3 chances yet to save it and one, perhaps two generations in which to do it. First, is the destruction of the “political class,” the group of elites from the federal government (and not just elected officials), academia, and the media that hold much of the reigns of power in the Federal government. That is the essence and what is most important of the Trump campaign. We are seeing the flushing out of these people in the Republican party just now as so-called Republicans are pledging their support to Hillary. 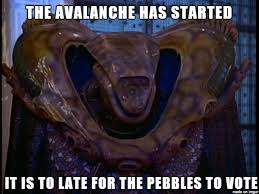 The second chance is an Article V convention that has been talked about in recent years. This is something that is a growing pressure with both States and the People. I know many fear this and I was one for quite some time. Looking at the State legislatures as well as the fact that the Federal government doesn’t control the convention has quelled that fear. At the very least, we could see a balanced budget, judicial restraints and a line-item veto come out of it. It would also be a fine opportunity to repeal the 17th Amendment. I would also expect to see strengthening the wording of the 1st and 2nd Amendments, and probably the 4th and 10th, along Conservative principles. These are non-social issues that the right-leaning supermajority of States could likely be convinced to support.

The third, and worst, chance is what tends to be called the “Second Amendment solution.” That approach is the one of greatest risk. There’s no predicting the chaos or outcome after the Federal government is deposed – and yes, I’m convinced that the fed will lose for many reasons beyond the scope of this comment. If you do not think this could end up in civil war, then you are fooling yourself. We are seeing more and more signs of people willing to take that step. If the path we are on continues, the only way to stop it would be to completely set aside the entirety of the Bill of Rights.

As far as the time frame? That is set entirely by two things: illegal immigration and Progressive control of the education system. In spite of all the damage done, it will take until our children or grandchildren to successfully undermine the foundations of American culture. Progressives know this. That is why they play the long game. They know they lose under any of the three chances I describe. Even as bad of shape as things are, the only way for Progressives to win with finality is for the People to give up their liberty willingly.

In one area, though, we are past the point of no return. At this point I believe violence is unavoidable regardless of how our course is corrected and even if it is not. It is not only the third chance that results in bloodshed. Be assured that if the nipple of entitlements is cut off or if Progressive States are stopped from robbing productive States there will be rioting and blood spilt. At this point, the choice is how much blood.

So, is it the end of the Republic? Most assuredly not. Is it a time of change? Most assuredly so, and drastic change, at that. Regardless the path we choose, it will be one of trials and when it comes to trials, they have always brought out the best in Americans. In this regard, I’m not like many of the commentators we hear on the air. Our best days do not have to be behind us, they can easily be ahead. We just have to chose it.