Why this clinical scientist opposes masks 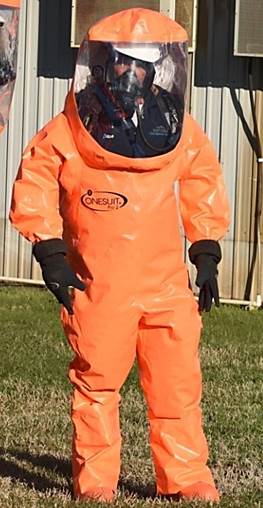 Umm… just to clarify. This isn’t a picture of me. It’s a category A hazmat suit here for satire.

Why don’t I wear a mask?  Or when I do, it’s a folded chiffon scarf? This answer is a bit long. It’s not a matter of political position, but clinical efficacy.  It’s also not a new debate.  I’ve found references of the tensions on the subject going back to the Spanish flu of 1918.

You’ll notice in the list, I’m not basing arguments on what CNN or FNC or any talking heads. These are all serious scientific positions. As one clinical article puts it:

What evidence there is for natural settings is not significant. And, before someone chimes in with the “But if there is any chance…” argument, all that does is show that you don’t know what the term means. Anybody who understands the phrase, “Is not distinguishable from random error,” will not even try this argument. Besides, there is clinical evidence of the harm and that same argument can be thrown back at you.

Basically, you don’t take an extreme action on a “just in case.” Good practice is that you protect your most vulnerable populations or high risk populations.

So if you wonder why the CDC technical guidance says both yes and no at the same time and is filled with caveats, or there are disclaimers on masks in the store regarding their usefulness, these are some of the reasons why. Sometimes they are disguised for those who don’t know how to read them, but they are there.  This last bit also connects with the “Then why are experts recommending them?” question. The answer to that is way outside the scope of this simple literature review.  I’ll leave it at that in my over 30 years of clinical science and medical devices, clinical policy, IMHO, is never based strictly on clinical science.  Clinical perception is always a component.  Sometimes the driving one.

Some mask articles that get to why I do not support mask use, with a very nutshell takeaway:

This Lancet paper seems to say both yes and no at the same time to the layman. Public use of homemade masks was based on 12-16 layers and requires “optimum use,” and was still classed low certainty and strongly weights it towards respirator class PPE. The real risk reduction her is physical distance of 1-2m.

Widespread use probably not impactful. Use in high risk environments for short term may be where they do the most good. It also points out some of the harms masks can cause. This article is more layman friendly than most of the others.

A peer response to the above article by a SME. Points out studies indicating that mask wearing can not only may be ineffective but can cause clinical harm.

A comparison of materials. The typical single layer cloth masks you see are pretty much useless. Leakage in even good materials ruin their utility. FUNNY ANECDOTE: Folding over a sheer chiffon headscarf like your grandma wears is likely highly effective. Not only as a baffle, but with electrostatic filtering. This doesn’t surprise me because this is essentially same material used to protect mics in pop filters (I’m a sound engineer on the side.  It keeps my sanity).  I would specifically note to review the corrections.  They actually give a better justification for the 2-layered chiffon as well as clarify there should not be conclusion drawn regarding properly worn surgical or N95 masks.

Again, what we see used in the public isn’t effective. Just like distancing, hand hygiene is the most effective element of the combination. If your homemade or cloth mask doesn’t include at least 4 layers of filter paper (each layer of which is multiple sub-layers), it’s not doing anything. One of the things they point out is that even when masks are “effective” the real impact may be not if you get it, but when.

A large scale meta-study that shows limited statistical power in overall effectiveness for public use. It, incidentally, focused on case-specific designs (it appears to be primarily cases where someone in a household is already infected). It also raises the social/cultural issues that impact effectiveness. This is where my quote at the beginning comes from.

Another meta-study pointing out the lack of efficacy particularly with respect to influenza viruses. This one also notes the impact of respirators. It also notes that any effectiveness is linked to “early, consistent, and correct usage.” (Hint: calling for them now is none of the above, even if they did help.)

This one is somewhat favorable to masks, but it does go into a lot of detail regarding the limitations and caveats. One important thing it does is discusses the difference between droplets and aerosols. Still, in context with the others, it really doesn’t build a case for masks.

The article most subject to “political” pressure. Even it limits the impact of masks to those who are symptomatic. One of their interesting findings was that passive shedding was not detectable or very low in influenza and corona viruses, though rhinovirus (the most common cause of colds) what high. It also noted (as do several other articles) a time component of exposure may be involved.

I’ve intentionally stayed away from articles that go into the issues of masks causing harm to the wearer.  That would be another article as long as this and it would also be out of scope for the subject.  I also tried to stay away from manuscripts reviewing masks as personal protection.  It’s already pretty well established that they don’t in  the case of viruses.  My primary focus remained on efficacy in minimizing spread.  Or to put it another way, there is a reason the masks you see on Amazon all have disclaimers noting that they are not intended to prevent the spread of disease.

So this is a part of “the other side” of the argument driving my decisions.  Clinical safety and efficacy are going to be my primary drivers, not giving some sort of social message.  I’m going to continue following the subject and if the evidence changes, my position will change to reflect it.  However, your choice is yours.  Whichever you choose, though, make your choice on reason not fear.