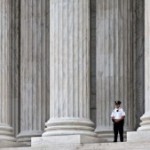 Most Americans would support imposing a term limit on the nine U.S. Supreme Court justices, who now serve for life, a Reuters/Ipsos opinion poll has found in the aftermath of major rulings by the court on Obamacare and gay marriage.